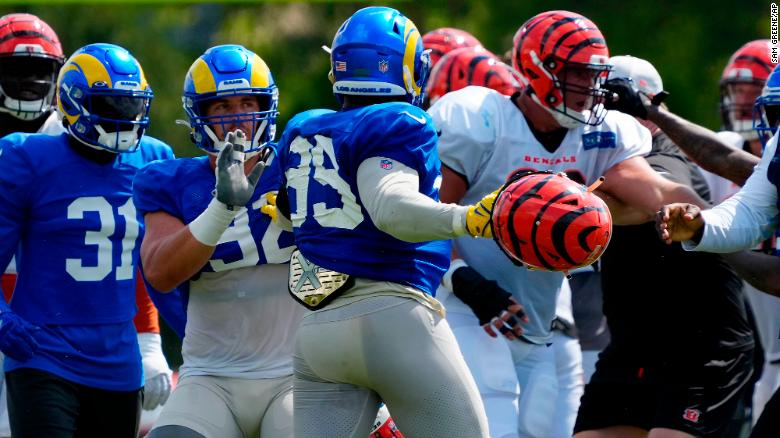 Los Angeles Rams star Aaron Donald appeared to swing a Cincinnati Bengals player’s helmet during a brawl in a joint practice on Thursday, prompting both teams to end the session.

A video posted on Twitter shows Donald holding a Bengals helmet and swinging it before getting knocked to the ground and being held back. Multiple punches appear to be thrown between both teams during the fight.
Bengals head coach Zac Taylor said the reason the practice was called early was because things “got a little scuffle-y” in the last period, and both teams decided there was no need to run the final few plays.
“We got two really good days of work in, so was it worth getting the extra couple of plays? No,” Taylor said.
The 31-year-old Donald, a three-time NFL Defensive Player of the Year, is unlikely to be suspended, as teams, not the NFL, are responsible for overseeing conduct of players at practice, including joint practices.
“I don’t know exactly what instigated it,” Rams head coach Sean McVay said after practice. “I think, in some instances, it’s teams defending each other.
“Fortunately, my understanding is nobody got hurt, and we’ll move on from it. Not going to make a bigger deal than what it is. Not going to look at pointing fingers.”
Donald was not made available to reporters after practice. CNN has reached out to both teams for comment.
Read from: https://edition.cnn.com/2022/08/26/sport/aaron-donald-practice-brawl-nfl-spt-intl/index.html
Share