Home > Asia > Who is ‘Bongbong’ Marcos Jr and why are some Filipinos nervous about his family’s return?

Who is ‘Bongbong’ Marcos Jr and why are some Filipinos nervous about his family’s return? 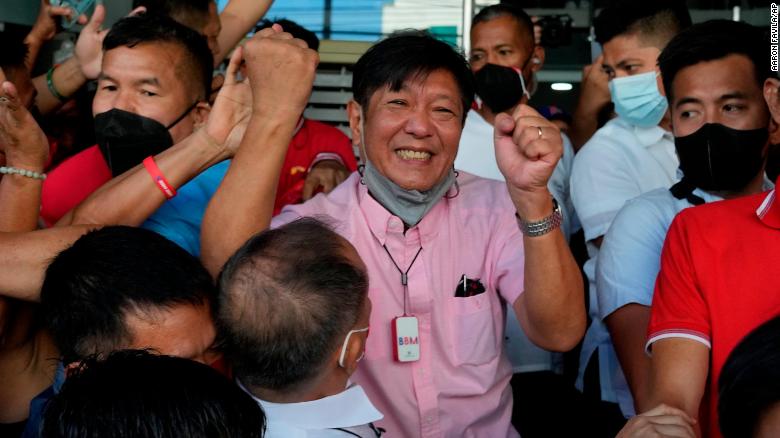 Ferdinand “Bongbong” Marcos Jr. is the presumptive President of the Philippines after winning a landslide in elections on May 9, according to unofficial results.

More than 30 million Filipinos voted for Marcos Jr., more than double that of his closest rival, the outgoing Vice President Leni Robredo, partial and unofficial results showed.
Despite his popularity among millions of voters, many Filipinos are shocked by his win and what it means for democracy in the Philippines.
Marcos Jr. is a member of one of the country’s most notorious political families. His win, analysts say, is the successful culmination of a decades-long rebranding campaign that has revived the Marcos family’s name and image.
Critics have pointed to a widespread disinformation campaign, recently supercharged through social media, that has whitewashed the history of the Marcos era, when Marcos Jr.’s father ruled the Philippines through a brutal and corrupt dictatorship that ended in a popular uprising in 1986.
Here’s why some are concerned about a Marcos Jr. presidency.

US President Joe Biden spoke with Marcos Jr. on Wednesday, congratulating him on his election win, according to a White House readout of the call.
“President Biden underscored that he looks forward to working with the President-elect to continue strengthening the US-Philippine Alliance, while expanding bilateral cooperation on a wide range of issues, including the fight against Covid-19, addressing the climate crisis, promoting broad-based economic growth, and respect for human rights,” said the readout.
China’s President Xi Jinping also congratulated Marcos Jr., saying the two countries would “stand together through thick and thin,” according to state media Xinhua. The bilateral relationship has frayed recently over dueling claims to areas of the South China Sea, though Marcos Jr. has been building a rapport with the Chinese Ambassador in recent months.
But lawmakers in Southeast Asia have expressed concern about human rights under a Marcos administration and the impact of online disinformation.
“The generalized spread of disinformation has created an environment which has made it difficult for many voters to make informed decisions at the polling station,” said Charles Santiago, a Malaysian lawmaker and chairperson of the ASEAN Parliamentarians for Human Rights.
“Even though the electoral process has been conducted in a formally correct manner, we are concerned that voting choices based on lies and harmful narratives could have seriously undermined the integrity of the elections and democracy itself.”
Human Rights Watch called on Marcos Jr. to end outgoing President Rodrigo Duterte’s “war on drugs” and “order the impartial investigation and appropriate prosecution of officials responsible” for extrajudicial killings.
“Marcos should publicly order the military, police and other security forces to cease targeting activists, human rights defenders and journalists for killing and other rights violations. He should end the practice of ‘red-tagging’ — accusing activists and government critics of being Communist fighters or supporters,” Human Rights Watch’s deputy Asia director Phil Robertson said in a statement.

Ferdinand Marcos Sr. ruled the Philippines for 21 years from 1965 until 1986, with the country living under martial law for about half of that time.
Tens of thousands of people were imprisoned, tortured or killed for perceived or real criticism of the government, human rights groups say.
As well as its restrictions on citizen rights and a brutal military police, the Marcos regime was marked by widespread corruption, with an estimated $10 billion stolen from the Filipino people.
The Marcos family lived a lavish lifestyle while in power, spending money on expensive artworks, overseas properties and jewels, even as debt spiraled and millions suffered in poverty. Former first lady Imelda Marcos was famously known for her extravagance and excess spending, which included an extensive designer shoe collection.
Their supporters say the Marcos years were a boon for the country, with the building of major infrastructure projects like hospitals, roads and bridges. Critics say those projects were built on the back of widespread corruption, foreign loans and ballooning debt.
Funds from institutions such as the World Bank disappeared, with the average Filipino not reaping any benefits. Lucrative building contracts went to friends and family.

Who is Marcos Jr.?

Marcos Jr. has not acknowledged the abuses committed during his father’s dictatorship and the family have repeatedly denied using state funds for their own use.
But analysts say the Marcos son benefited from that ill-gotten wealth. “My parents would never let us forget: This is not yours, this is from the people. Everything we have, all the advantages we have gained, any the successes, and any comfort or privilege we enjoy comes from the people,” he said in a recent interview with CNN affiliate CNN Philippines.
Marcos Jr. was 23 when he became vice governor of the northern province of Ilocos Norte in 1980, running unopposed with his father’s party.
He was governor when, six years later, his family were chased into exile in Hawaii following a People Power revolution that toppled his father’s regime in 1986. Marcos Sr. died in exile three years later, but his family returned in 1991 and became wealthy, influential politicians, with successive family members representing their dynastic stronghold of Ilocos Norte.
Upon their return to the Philippines, Marcos Jr. became a congressional representative in his home province. He was again elected governor of Ilocos Norte before completing another term as a representative. In 2010, Marcos Jr. became a senator.
In 2016, he ran for vice president and was narrowly defeated by Leni Robredo — a former human rights lawyer and his closest rival in the 2022 presidential race.
Personalities and dynasties dominate Philippine politics, with power concentrated in the hands of a few elite, influential families. Marcos Jr.’s sister Imee Marcos is a senator, his mother Imelda, now 92, was a four-time congresswoman, and his son, Sandro, was elected as a congressional representative in 2022. Imee’s son Matthew Marcos Manotoc was also reelected as governor of Ilocos Norte in 2022.
The May 9 election also saw the partnership of another major political dynasty: the Dutertes.
Marcos will replace outgoing populist leader Rodrigo Duterte but the Dutertes won’t be far from power. Marcos Jr.’s running mate, Sara Duterte Carpio is the outgoing Davao mayor and daughter of the former President. Partial and unofficial results have her as winning a landslide for the vice presidency.

Why people are concerned

The Marcos regime may have ended in the 1980s, but campaigners say the Marcoses were never held accountable for the scale of their misdeeds and fear Marcos Jr. could erode efforts to settle past injustices.
As President, Marcos Jr. would be head of the institutions created to investigate allegations against his family’s former regime.
The Presidential Commission on Good Governance has recovered less than half the stolen wealth and active cases remain. An unsettled estate tax of the Marcos family is estimated to now be worth $3.9 billion, but there are concerns Marcos Jr. would scrub that. Imelda Marcos was found guilty of corruption in 2018 but a Supreme Court appeal remains pending and she never went to prison.
Though Marcos Jr. has said he would expand the PCGG and tackle graft and corruption, many worry justice will not be served.
About 11,000 victims of martial law abuses received some financial compensation but campaigners say they represent a fraction of all victims. “There is no more justice to hope for if Marcos Jr. becomes President,” said Bonifacio Ilagan, co-convenor of the group Campaign Against the Return of the Marcoses and Martial Law.
President Duterte’s administration cracked down on civil society and the media — slapping tax evasion charges on local, independent media outlets that challenged the government’s policies and claims, and arresting editors.
Some fear that Marcos will continue down Duterte’s path and that disinformation will further obscure the truth, making it harder to hold those in power accountable.
Duterte is also facing an investigation by the International Criminal Court into his “war on drugs” that has killed more than 6,000 people, according to police, and his successor could influence how much access investigators get to the Philippines.
“I will let them into the country, but only as tourists,” Marcos Jr. said in January, according to Reuters.
Sociologist Jayeel Cornelio said, “While one camp is celebrating, the other camp is worried about the economy, education, and civil liberties.”
“The greater concern that Filipinos have has to do with the next six years. What will the economy look like in the next six years? What will happen to civil society? Will there be a clampdown on press freedom? And will the administration wipe out martial law in the curriculum? These are just some of the questions — and these are fundamental ones — for those who resisted the Marcoses’ return to power,” said Cornelio, associate professor and director of development studies at the Ateneo de Manila university.
Read from: http://s-president-explainer-intl-hnk/index.html
Share