French election: Thousands protest against far-right ahead of presidential run-off 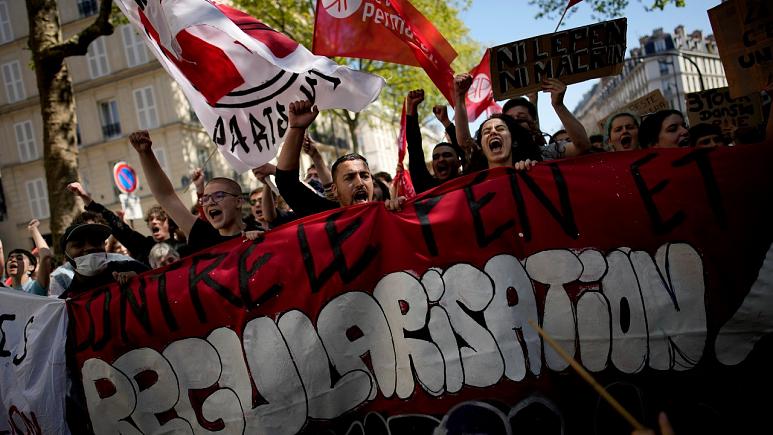 “Better a vote that stinks than a vote that kills”. In Paris and in towns and cities across France, thousands of people protested against the far-right ahead of next weekend’s presidential run-off.

Many made it clear that in saying “no to the far right” they did not support Emmanuel Macron either — but would reluctantly cast their ballots for the current president in order to keep out his far-right rival.

“We are here to say no to the far right. (…) for society, freedoms but also the climate. It would be a real regression if it came to power,” said Jean-François Julliard , Managing Director of Greenpeace France. He was one of several thousand people who protested in Paris.

One sign in Paris recalled: “2002 was no, 2022 is still no”, a reference to the “republican front” which saw millions mobilise to re-elect Jacques Chirac and keep out the far-right former “Front National” leader Jean-Marie Le Pen who had made it to the second round.

There were similar scenes in Marseille too, the city where Emmanuel Macron held a meeting on Saturday. “We are here to block the far right”, exclaimed one high school student, Medina Bayoui.

In Lyon, where the demonstrators were mostly young people, Emma, ​​a 23-year-old student, said she was taking a stand “against the trivialisation of dangerous ideas, against racism, exclusion, potential dictatorship”.

Bruno, a 60-year-old teacher, came from Chambéry to Lyon to say “no to nationalism, populism, xenophobia”.

Marine Le Pen, who campaigned earlier in Saint-Rémy-sur-Avre, west of Paris, criticised the protests. “Coming to demonstrate against the results of an election”, she said, was “deeply anti-democratic… I think the French find it unpleasant to see their choice being challenged in the street, through demonstrations”.

“Neither Le Pen nor Macron”

While the demonstrations were all against the far right, many who turned out made it clear they did not back the outgoing president either.

Sasha Halgand, an activist from SOS Racisme, regretted being faced with “a Macron / Le Pen duel which young people don’t want,” explaining that a vote for Macron would be tactical. “If Marine le Pen came to power, there would be fascist militias, draconian laws.”

Lucile Muller, 19, a student in Paris, took issue with both candidates. “We already had the same result five years ago but we did not know Macron. Then we saw police violence, draconian laws (.. .) We would have preferred a second round between Mélenchon and Macron, with debates on ecology for example”.

In Paris, a few clashes broke out between police and around 100 people towards the end of the march.

And if in Paris a sign recalled: “2002 (Editor’s note: Jean-Marie Le Pen against Jacques Chirac in the second round) it was no, 2022 is still no”, recalls a sign in Paris.