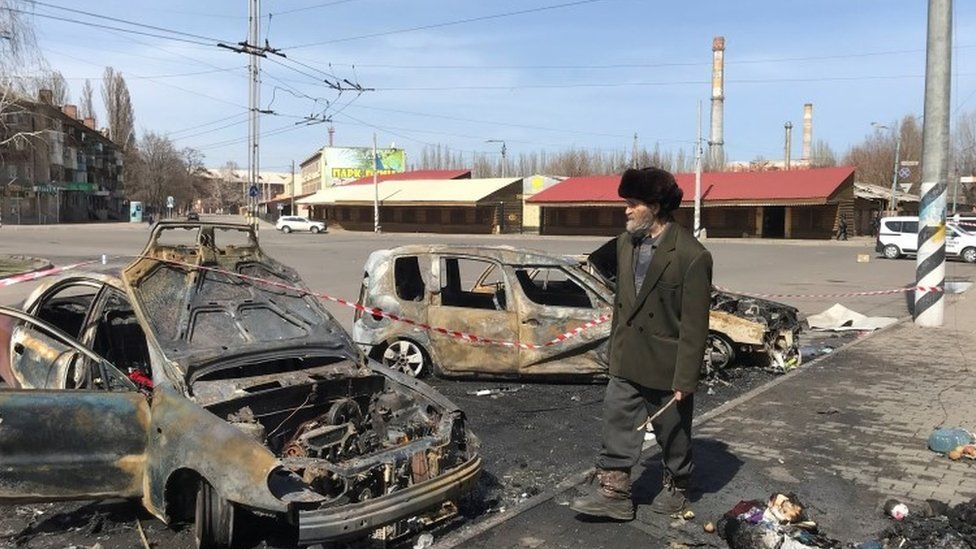 More than 50 people were killed and many more wounded in a missile strike on a train station in the eastern city of Kramatorsk on Friday. One day later, people are attempting to pick up the pieces from the deadly attack.

They’re still searching through the wreckage and debris at Kramatorsk station.

The bodies of the dead were soon removed from the scene of a missile strike on Friday, but you can still see the dried blood and some evidence of human remains 24 hours later. The uncollected travel bags of those who did not survive have been gathered together and now lie in an empty ticket office.

Sergei, a volunteer with the Ukrainian Army, was still looking through the wreckage of destroyed cars, parked outside the station. There was evidence in one of a burnt child’s body.

Sergei is used to death. He’s been recovering the bodies of Ukrainian soldiers killed in battle. But on Friday, he was having to gather the corpses and the remains of unarmed civilians – the innocents of this war. He has no doubt that Russia is to blame for the attack that has left more than 50 people dead and many more injured.

Watching mothers grieve over children killed in the blast has clearly taken its toll on Sergei.

“When you see our future, the future of Ukraine being killed, you can’t control your emotions,” he says. He calls it a genocide.

“You just don’t understand the motivation of the people who did this. What was this for?”

Thousands of people were gathered at Kramatorsk station when the missile struck at 10:30 in the morning. They were waiting for a train to take them west, to relative safety. The region’s authorities had told civilians to leave as Russia steps up its offensive in the Donbas. Kramatorsk and a number of other cities in eastern Ukraine have recently been targeted by Russian airstrikes, artillery and missiles.

Russia has denied it was responsible for Friday’s attack. It even claims that it wasn’t their missile. It’s still not clear what exactly happened.

Ukraine’s state railway says the station was hit by two missiles. The damage is certainly spread over a wide area. It’s possible there were three missiles – and one was shot down by Ukraine’s air defences.

On Saturday, investigators were examining the remains of what looks like a Tochka missile which landed just yards from the station. Part of the casing remains intact. In white paint, someone has written in Russian: “For the Children”. Was it meant as some kind of revenge? If so, for what?

Eyewitnesses also describe seeing multiple explosions, raising questions as to whether the missile, or missiles, had been fitted with cluster munitions. Banned by many countries, they’re designed to kill and maim over a wide area.

At Kramatorsk hospital, medical staff had been working through the day and night to treat the many injured.

Surgeon Victor Borisovich said six people died before they had a chance to operate. Another two died after surgery – including a young child. Victor says many were life-threatening injuries, which he lists as “amputations, torn limbs, torn feet, stomach wounds and brain injuries”. He tells me he has no doubt that the injuries and deaths were the responsibility of Russia.

“I can’t imagine what kind of person takes the decision to launch a missile into a place where civilians are gathering,” he says. “It just cannot be explained.”