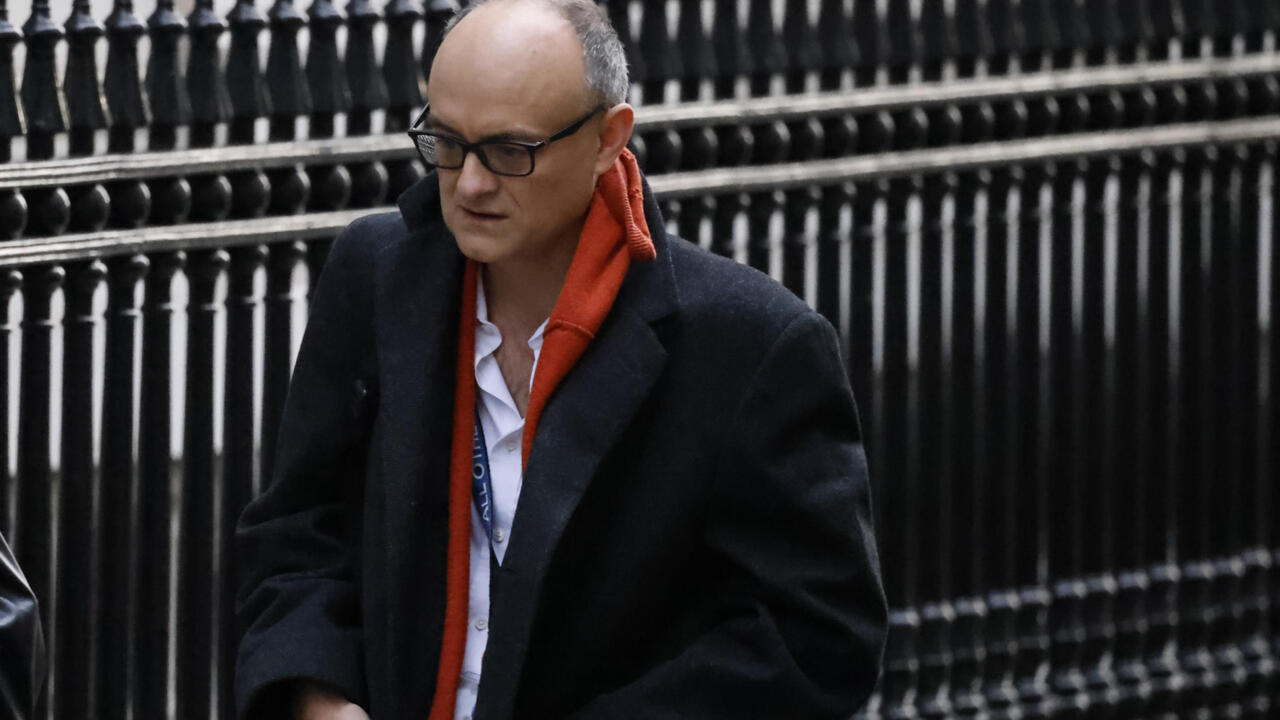 Dominic Cummings, the controversial brains behind the 2016 campaign for Britain to leave the European Union, on Friday stepped down as Prime Minister Boris Johnson's top aide.

Amid speculation that he would leave the government at the end of the year, Dominic Cummings was pictured Friday leaving from the front door at 10 Downing Street.

Cummings was due to leave at the end of the year, reports said, but he was seen walking out of Johnson's 10 Downing Street office on Friday carrying a cardboard box.

A government source confirmed he would no longer be officially employed from "mid-December".

Cummings, a chief architect of the campaign to have Britain leave the European Union, has been a divisive figure inside the Conservative government since Johnson became prime minister 16 months ago. His position weakened earlier this year after he drove hundreds of miles across England after contracting Covid-19, violating national lockdown rules and leaving the impression that elite officials didn't have to obey the same onerous rules as everyone else.

The episode fuelled criticism of the government’s handling of the pandemic after delays in the expansion of testing and efforts to avoid a second national lockdown in England. That lockdown was finally imposed last week, but it couldn’t stop the UK from becoming the first country in Europe to pass 50,000 deaths during the pandemic.

Nicknamed “Boris' brain'', Cummings has also been the target of complaints from senior members of Johnson’s Conservative Party, who say that unelected advisers in the prime minister’s Downing Street office were effectively running the government, sidelining ministers and Parliament.

Bernard Jenkin, chairman of an influential committee of Conservative lawmakers, said Cummings’ resignation is an opportunity for Johnson to “reset how the government operates”.

“I would suggest there are three words that need to become the watchwords in Downing Street: they are respect, integrity and trust,” Jenkin told the BBC. “And certainly in the relationship between the Downing Street machine and the parliamentary party, there’s been a very strong sense that that has been lacking in recent months.”

Despite winning an 80-seat majority in last December’s general election, Johnson’s government has been forced into a series of embarrassing policy reversals in recent months, stoking criticism that Cummings was giving the prime minister bad advice.

In addition to his stance on lockdown, Johnson has backtracked on decisions to let the Chinese technology giant Huawei participate in building Britain’s new mobile phone network; one to use an algorithm to assign grades to students after annual school tests were cancelled due to the pandemic; and a third not to extend free meals to poor children when schools were closed as Britain faced rising unemployment due to the pandemic.

In a January blog post, Cummings called for changes in the way government works, claiming that the civil service didn’t have enough expertise in some fields. He infamously said “weirdos and misfits with odd skills” could help the government develop better policies.

In that post, Cummings said he wanted to make himself “largely redundant” within the next year.

In his Thursday interview with the BBC, Cummings said rumours that he had threatened to resign this week were untrue, but that “his position hasn’t changed since my January blog”.

Transport Secretary Grant Shapps downplayed Cummings’ departure, saying he has achieved many of the things he set out to do.

Cummings’ signature policy goal was Brexit – ensuring Britain’s departure from the EU – and that process is scheduled to be completed at the end of this year. More recently, he has taken the lead in rolling out mass testing to help control Britain's Covid-19 outbreak, and that programme is now being rolled out.

“It’s always been good to have somebody in the room who sort of shakes things up, asks why, doesn’t take no for an answer,” Shapps said. “And that’s been very much the way Dominic Cummings has been able to bring his talents to No 10, but he’s ready to move on.”

But Cummings has been criticised for creating an adversarial relationship between the prime minister’s office and those he thought stood in his way, including civil servants, the BBC and backbench lawmakers.

Jenkin said there has also been a breakdown in Johnson's government, with Johnson appointing inexperienced Cabinet ministers then dictating policies to them, rather than having ministers take responsibility for their departments.

Cummings’ departure is an opportunity to reshuffle the government and bring in more experienced ministers, Jenkin said.

“If you don’t have the corporate memory, well then history repeats itself and people make the same mistakes, or certainly mistakes that can be avoided,” Jenkin said.