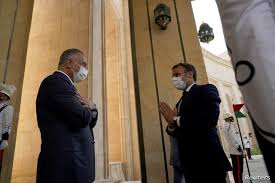 BAGHDAD – French President Emmanuel Macron voiced support on Wednesday for a sovereign Iraq and said its main challenges are Islamic State militants and foreign interference in its affairs.

“We will remain committed because the battle against Islamic State is ongoing but this has to be in the context of an agreement and protocol that respects Iraq’s sovereignty,” he said at a joint news conference with Kadhimi.

Macron’s visit was the first by a Western leader to Iraq since Kadhimi took office in May as the third head of government in a chaotic 10-week period that followed months of unrest in a country exhausted by war with Islamist militants, corruption and economic decay.

Kadhimi was appointed to head a government tasked with organizing an early election, a main demand of anti-government protesters who staged months of mass demonstrations last year. He has called one, to be held in June.

Iraq has also struggled to cope with the clashing regional interests of its two major allies, the United States and Iran.

French officials have said Paris is worried by a resurgence in Iraq of Islamic State militants profiting from political uncertainty and rivalries between Iran and the United States.

Islamic State, which once occupied a third of Iraq’s territory, has been largely defeated there but continues to carry out ambushes, assassinations and bombings.

French President Emmanuel Macron and Iraq’s President Barham Salih greet each other with an elbow bump as they attend a news conference in Baghdad, Iraq, Sept. 2, 2020.

“The war against Islamic State isn’t finished … we will continue to act alongside you in the framework of the anti-Islamic State coalition,” Macron said after meeting Iraqi President Barham Salih.

“The second challenge is … the multiple foreign interferences that have been going on for several years.”

Macron also discussed energy cooperation with Kadhimi and working together on a nuclear project that could solve Iraq’s chronic electricity shortages as well as French support for building a metro railway in Baghdad.
Read from source