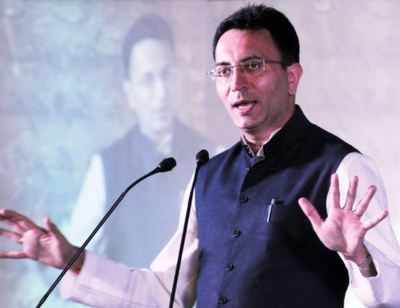 NEW DELHI: Congress leader Jitin Prasada, one of the 23 leaders who wrote to party chief Sonia Gandhi seeking organisational changes, said on Saturday that the letter is being "misconstrued" and he has full faith in the top leadership.
In an exclusive interview to PTI, he said the letter was not written with the intention of leadership change.
Asked why he chose to sign the letter, Prasada said the "letter was written with the sole purpose of suggesting how to reinvigorate and revitalise the party, and introspect for galavnising the organisation. It was not to undermine the top leadership. I had stated this at the Congress Working Committee meeting as well".
"The letter is being misconstrued," the former Union minister asserted.
On allegations by some party leaders that the intention was to target the top leadership, Prasada said, "I have full faith in the leadership of Sonia Gandhi and Rahul Gandhi and they have full faith in me."
His remarks assume significance as they come days after the District Congress Committee of Lakhimpur Kheri hit out at the letter from the 'group of 23' and called for action against Prasada.
Prasada said the resolution passed by the DCC seeking action against him could have been the "result of local instigation of rival factions".
"These are small matters which happen in every democratic party and could be the result of local instigation of rival factions. I bear no grudge against anyone as everyone is part of the Congress family," the 46-year-old leader said.
"The Congress president has said that the matter stands closed and we have to concentrate on fighting the ruling dispensation," he said.
Asked about an audio clip that went viral on social media platforms in which Lakhimpur Kheri DCC chief purportedly suggested that the resolution was passed following directives of AICC, Prasada said, "I don't comment on unverified media reports."
On the way foRead More – Source