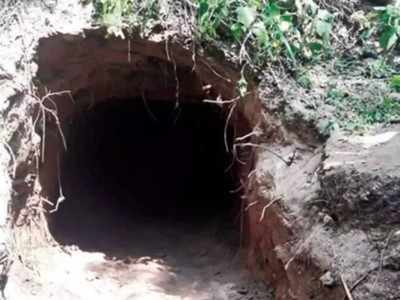 JAMMU: BSF troops on Saturday foiled Pakistans bid to push terrorists into India by detecting a tunnel dug from the Pakistani side along the International Border (IB) in J&Ks Samba district. Sandbags with Karachi markings were recovered from the site.
Soon after the detection of the tunnel, BSF inspector-general Jammu Frontiers N S Jamwal told reporters that the force had been receiving several inputs about the existence of the tunnel in Samba border area recently. “In view of the prevailing security scenario, Jammu BSF started a special anti-tunnelling drive all along the IB in Jammu region by constituting special teams. One such team investigating the matter found the cross-border tunnel.”
Giving details of the operation, IG Jamwal said, “On August 28, a BSF patrol party carrying in-depth scanning of the area during the anti-tunnelling drive suspected a place along the IB in Samba district, and detected a tunnel approximately 25ft-deep and around 3-4ft in diameter in the Indian territory near the border fencing in Galar area. The opening of the tunnel is about 170m from the IB towards the Indian side in a local farmers field.”
Some Pakistan-made sandbags with markings of Shakargarh and Karachi factories were also found at the mouth of the tunnel to conceal it. “The sandbags with Pakistan markings clearly show that it was dug with proper planning and engineering efforts. Without the approval of the Pakistani establishment or other agencies, such a big tunnel cannot be built,” he said. The condition of the sandbags indicated that it was a “fresh tunnelling bid”, the IG added.
This is not the first time such a tunnel was detected. On August 22, 2014, an Army patrolling team found a cross-border tunnel approximately 50m from the Line of Control in Jammus Pallanwala sector. On August 8, 2012, a joint team of GeoRead More – Source