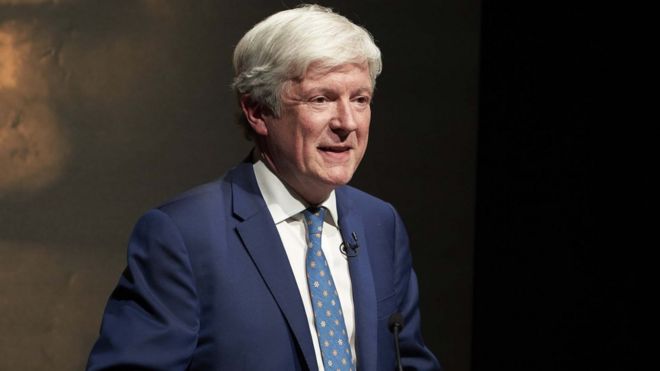 The BBC has to be “an organisation that listens and learns from it mistakes”, its outgoing director general has said.

“The PSBs are vital to democracy, they inform us, they educate us,” he said.

“In this country they do it for all of us, no matter who you are, you have access to the best.”

Lord Hall’s address on Monday marked his final speech as director-general of the BBC, after seven years in the job.

He will be replaced by Tim Davie from 1 September.

Reflecting on his time since taking on the job in 2013, Lord Hall said: “I don’t need to remind you that seven years ago we were an organisation in crisis.

“It was in the wake of the [Jimmy] Savile scandal. There were failings over executive pay-offs and fundamental questions hanging over. Today, we are an organisation transformed inside and out.”

But, he added, there are still improvements to be made.

“I believe diversity of thinking leads to great programmes. We need to attract people who have different ideas, who come from different backgrounds, have different thoughts about what is important,” he said.

“We also have to be an organisation that listens and learns from it mistakes.”

Lord Hall has personally intervened twice in two BBC scandals in the last year – reversing the corporation’s position on the Naga Munchetty racism row and the recent broadcast of the n-word in a news report.

Lord Hall reiterated the corporation’s commitment to spending £100m of its TV budget on improving diversity.

He also outlined plans for the corporation to double its worldwide reach to a billion people by the end of the decade.

Lord Hall also said the BBC has shown how crucial public service broadcasting is during the coronavirus pandemic.

“Public service values have never been more needed. We’ve been reminded how deeply stitched we are into the fabric of national life,” he said.

“The BBC as public service media can now do more for the UK than ever before and we are ready to do more.

“We have been reminded how important those things are that bring us together, we all know and feel how the last few years have heightened the sense of polarisation and Covid has brutally exposed the fault line.”

Lord Hall drew attention to the educational programming offered to children while they were off from school during the recent lockdown.

He also highlighted the BBC’s recent coverage of the commemoration of VE Day, the Great British Singalong which saw several radio stations link up, and April’s The Big Night In, which raised £70m for charity.

“Public Service broadcasters have always been part of the glue that binds our nations and communities together, but the last few months have emphasised that still further,” he said.

He described the documentary Once Upon A Time in Iraq as “a series that pushes the boundary of what the genre does, I’ve seen nothing like it”.

He continued: “When I look at something like Michaela Coel’s extraordinary I May Destroy You, I see much more than an unmissable drama, I see a unique voice and talent given unprecedented creative freedom to speak directly to a generation about issues and experiences that matter right now.”

Touting the BBC’s ratings during lockdown, Lord Hall told the festival: “Audiences came to us in their millions for information they could rely on and respite from worries everyone was experiencing. In March, 94% of British people used the BBC.

Lord Hall said the BBC has transformed over the last seven years, saying the corporation is “leaner and more efficient than ever”, and with more staff based outside of London.

He continued: “PSBs can do more for the UK in the year ahead. We have to keep banging the drum for what only we can deliver.”