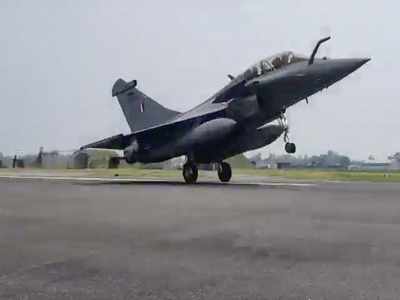 NEW DELHI: Eight months after the Comptroller and Auditor General (CAG) submitted its performance audit on defence offset contracts to the government, a top source in the federal auditor has revealed that the report has no mention of any offset deals related to Rafale aircraft purchased from French company Dassault Aviation. The government is yet to table the report before Parliament.
The Ministry of Defence (MoD) has denied any information related to the Rafale offset deals to the auditor. According to people involved with the audit, the MoD has informed the federal auditor that Dassault Aviation, the French manufacturer of Rafale, has said that it will share any details of its offset partners only after three years of the contract.
India received the first set of five Rafale fighters last month from France. In the 36 aircraft deal, signed for Rs 59,000 crore, Dassault Aviation has agreed to provide all fighters in a fly away condition between 36 to 67 months from the date of signing of the Inter-governmental agreement in 2016.
It has emerged that the CAG has reviewed only 12 defence offset contracts in its performance audit report submitted to the government in December 2019. “We have been told by the MoD that the French manufacturer of Rafale has not shared any details on the offset deals so far,” sources said.
In the run-up to the 2019 General Elections, the Rafale deal had caused a lot of controversy with the main opposition party, Congress, demanding a CBI inquiry on the terms of the Dassault Aviation appointing Reliance defence of Anil Ambani group as its partner for the offset contract. However, the government had not made any statement on who had bagged the offset contracts, saying it was the sole discretion of the French manufacturer.
According to sources, the federal auditor had initially picRead More – Source