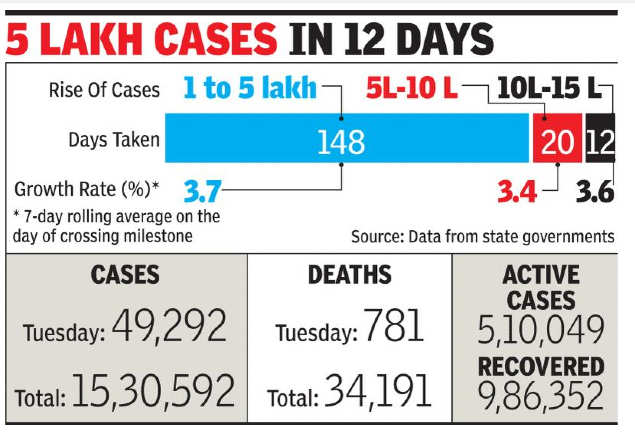 NEW DELHI: Indias Covid-19 caseload went past the 15-lakh mark on Tuesday, with the last 5 lakh cases having come in just 12 days, even as the country reported its second-biggest jump in infections and the highest death toll of 781 in a single day.
After showing a dip on Monday, fresh cases again rose to 49,292 on Tuesday, the second-highest daily count after Sundays record of over 50,000, as per data collated from state governments. Deaths recorded during the day went past the previous single-day high of 757 on July 24.
Indias coronavirus caseload is the third highest in the world after the US (44.3 lakh) and Brazil (24.4 lakh). Russia has the fourth largest count of cases at 8.2 lakh, as per the Worldometers.info website.

For the first time in weeks, Maharashtra did not register the highest daily cases. It was dislodged by Andhra, which recorded 7,948 fresh cases.
For 2nd day, recoveries trump cases in Maharashtra
At 7,717, Maharashtra reported the second-highest count of daily cases.
Fresh infections surged in the country although just three states — Karnataka (5,536 new cases), Kerala (1,167) and Punjab (612) — recorded their highest single-day jump in cases. Fresh cases in Maharashtra, which had dropped by nearly 1,500 to 7,924 on Monday, dipped further.
However, several other big states reported fresh cases close to their highest yet, with Tamil Nadu detecting 6,972 infections, Uttar Pradesh Read More – Source