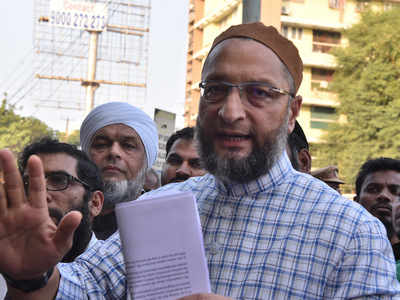 HYDERABAD: AIMIM chief Asaduddin Owaisi on Tuesday said Prime Minister Narendra Modi's possible attendance to the 'Bhoomi pujan' ceremony of the Ram temple at Ayodhya on August 5 would mean violation of his constitutional oath, even as VHP called for celebrations on that day.
In a tweet, Owaisi said, "Attending Bhoomi Pujan in official capacity will be a violation of @PMOIndia's constitutional oath. Secularism is part of the Basic Structure of Constitution."
According to members of the Shri Ram Janmabhoomi Teertha Kshetra Trust, Prime Minister Narendra Modi is likely to visit Ayodhya on August 5 for the "bhoomi pujan" (ground breaking ceremony) to begin the construction of the Ram temple.
Veteran BJP leaders LK Advani, MM Joshi and RSS chief Mohan Bhagwat are among those who have been invited to the ceremony.
"We can't forget that for over 400 years Babri stood in Ayodhya & it was demolished by a criminal mob in 1992," the Hyderabad Lok sabha member said in another tweet.
International joint general secretary of Vishwa Hindu Parishad, Surendra Kumar Jain in a Facebook live address said that the 500-year old struggle of Hindu society would soon fructify.
"Lakhs of people sacrificed for the Ram Temple construction. The whole country is determined to construct a temple at Ram Janmabhoomi. Bhoomi Pujan will be held on August 5. The Prime Minister will take part in that Bhoomi Pujan," he said.
Jain appealed to the people to face towards Ayodhya at 10.30am on August 5 and chant Ram's name offering 'Aartis' with determination in mind for construction of the temple.
The day should be celebrated as Diwali by lighting lamps in every houRead More – Source