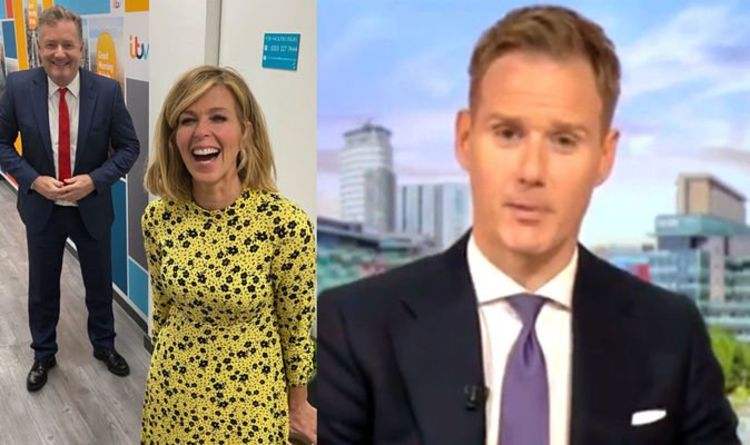 DAN WALKER – a BBC Breakfast host – has hit back at a Twitter user after he welcomed back Kate Garraway following her break on Good Morning Britain as her husband Derek Draper continues his health battle in hospital.

BBC Breakfast host Dan Walker, 43, welcomed back Kate Garraway, 53, to Good Morning Britain yesterday for the first time since her husband Derek Draper was admitted to hospital after contracting coronavirus in March. However, despite his kind message, one Twitter user questioned his context.

It comes after Piers Morgan, 55, shared his delight over his reunion with Kate back in the studio for the first time in four months yesterday.

After he and his co-presenter Susanna Reid, 49, conducted their exclusive interview with their ITV colleague, Piers proceeded to share a smiling selfie with Kate, in view of his 7.6 million Twitter followers.

The TV host wrote: “So lovely to have Kate back in the studio today & to see that fabulous smile again.”

Once Dan noticed Piers’ sweet tribute online, he soon replied to the broadcaster: “Great to see. Enjoy your break.”

However, after Dan respectfully reached out to the ITV favourites, one fan cheekily wrote: “Enjoy her break? Really?”

The BBC Breakfast star replied: “Use your [brain] Dan.”

The social media user replied: “And use yours and spell correctly!”

The BBC star was referring to Piers and Susanna’s decision to take a well-deserved break from presenting until September.

A representative for Good Morning Britain told Express.co.uk Piers and Susanna will return in early September, and a range of presenters will cover for them over the summer.

Kate joined her co-stars to give an update to viewers on how her husband Derek is at the moment as he remains in intensive care to fight the effects of coronavirus in a “minimum state of consciousness”.

Meanwhile, Dan also told the presenter and his followers how “lovely” it was to see her gracing the nation’s TV screens again, yesterday.

It comes after Good Morning Britain shared a clip of Kate’s interview on Twitter and quoted her.

They wrote: “Kate Garraway joins us in the studio to update us on how her husband Derek is fighting against the devastating effects of coronavirus.”

After GMB shared their update, Dan retweeted their interview and penned: “Just catching up but lovely to see @kategarraway back on the television today.

“Kate… everyone at BBC Breakfast wishes you, Derek, and the family the very best. See you soon.”

Fans were quick to rush over to the comments section to express their thoughts over Kate’s interview.

One pleased follower wrote: “This is lovely to read. I thought @kategarraway showed great hope and strength in her interview this morning.”

Another commented: “Well said Dan, nice to see you looking out for your fellow presenters.”