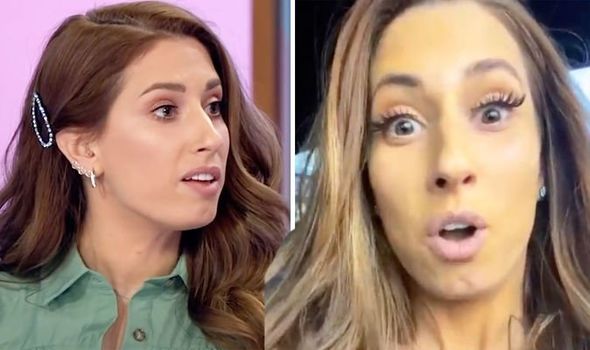 STACEY SOLOMON – a panellist on Loose Women – has spoken out about a worrying mix-up which saw her confuse olive oil with vegetable oil while demonstrating a household hack today.

Stacey Solomon, 30, shared with her 3.5 million Instagram followers how she created her own olive oil bottle like ones used traditionally in Italian restaurants. The Loose Women star revealed that she had purchased a supermarket oil bottle and spray painted it white, before carefully placing an “olive oil” label on it.

In the next video, Stacey Solomon filled the bottle with Tesco vegetable oil which is traditionally used for frying food products.

Eagle-eyed Instagram users were quick to spot the mistake and immediately alerted the reality star.

Addressing the camera, Stacey responded: “So many of you are messaging me saying Stace you’re putting vegetable oil in the olive oil jar.

“I just thought it’s all the same ain’t it? Oil is oil, it will be alright won’t it. Now I’m worried.”

Stacey Solomon shared responses from her adoring fans who had advised her on the best way to proceed.

One said: “Babe it’s fine! There is a difference but not a lot if you’re cooking with it! Just don’t use it for dipping bread!”

Similarly, a second replied: “Fine as long as you don’t use it as a dressing x.”

The videos from Stacey came after she had spent the day with best friend and cleaning hack expert Sophie Hinchliffe, who is best known as Mrs Hinch.

Since lockdown the friends have been unable to spend time with each other and yesterday were reunited in a united display for their respective Instagram accounts.

Stacey and Sophie uploaded a snap of the pair sitting in a garden enjoying what appeared to be a glass of wine.

They captioned the photo: “It’s been far too long. We love you all.”

On Stacey’s account, the post has racked up over 309,000 likes, as fans gushed over the two ladies.

Sophie commented underneath the sweet photo: “There may no longer be a forest swing but I wouldn’t change a thing. We’ve had the best day. Thank you.”

The two busy working mums have bonded over sharing two young sons of a similar age.

Previously fans have accused the Loose Women star of copying the lifestyle influencer.

One commented on a post of Stacey’s: “Can’t remember Stacey doing anything like this before becoming Mrs Hinch bestie.”

Another posted: “Stacey copying Mrs Hinch and all of a sudden she’s the tidy expert.”

Stacey hit out at the comparison as she uploaded a snap at the beginning of this year cuddling the cleaning whizz insisting they were “women supporting women”.