Black and treated as such: Frances anti-racism protests expose myth of colour-blind Republic 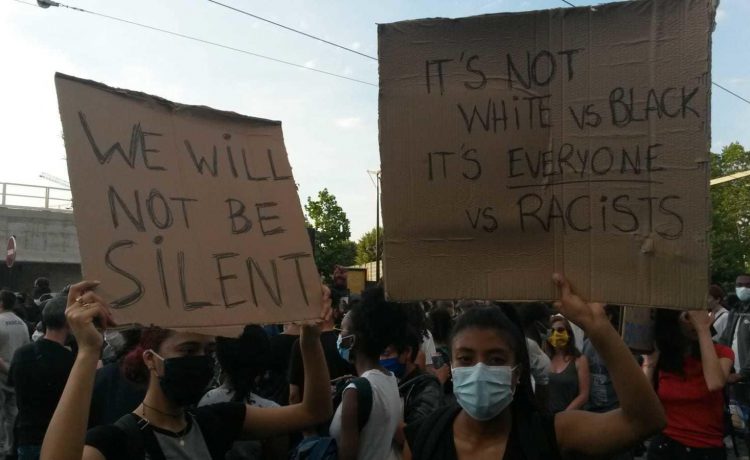 The unprecedented wave of protests that swept French cities over the past week has exposed cracks in the countrys universalist model, lifting long-standing taboos and fuelling calls to shed the “myth” of a Republic immune to racism.

Maelle B. dithered at length before heading to the Paris courthouse to protest against racism and police brutality. Sporting a broad face mask, the 23-year-old student from the Paris suburbs carried milk and eye drops in her rucksack to ease the sting from teargas.

“Were black, Arab, white etc. This is the reality. And we need to stop pretending that blacks and others are not discriminated against,” she said, holding up a sign that read: “Its not black vs white. Its everyone vs racists”.

Maelle was among more than 20,000 people who rallied in northern Paris on June 2 to vent their anger and frustration over discriminations that have been allowed to fester unchallenged for decades. Inspired by the global protest movement triggered by the George Floyd killing in the US, the Paris gathering was Frances largest such rally in decades.

“Of course France and America are very different countries, but they have a common enemy in racism,” said Maelle. “Nothing will ever change until people are educated about racism.”

The June 2 gathering was just the first in a wave of rallies that have swept French cities in recent days, surprising even their organisers by the size and diversity of the crowds. It reignited a longstanding dispute about policing in the immigrant-rich suburbs of Frances largest cities, forcing the government into a rare admission that “there are racist police officers” and that such deviance cannot be tolerated.

Rokhaya Diallo, a prominent anti-racism campaigner who attended the Paris rally, said she had never seen such a large gathering before. In an interview with FRANCE 24, she credited the impressive mobilisation with helping to lift entrenched taboos.

“Racism and police brutality were largely hushed by the media before,” Diallo explained. “The coverage now is still often skewed against the protesters, but at least these subjects are considered worthy of debate.”

Beyond the issue of policing, the mobilisation has led to a new bout of soul-searching about the long-neglected cracks in the French Republics universalist model, which undermine its cherished principles of égalité and fraternité. Mirroring debates taking place in the US, it has prompted talk of “white privilege” — a notion Frances nominally colour-blind Republic is deeply uncomfortable with.

In a searing letter read out on France Inter radio on June 4, prominent novelist Virginie Despentes compared treatment of racial minorities with the relative privilege of being white.

She added: “A white person like me can move freely through the city without even noticing the police. […] I cannot forget I am a woman. But I can forget I am white. Thats what it means to be white. To think about it or not, depending on your mood. In France, we are not racist, but I dont know a single black or Arab person who has such a choice.”

The racialised nature of inequality in France is a no-brainer for Maboula Soumahoro, a specialist of African diaspora studies at the University of Tours.

“I am black and I am treated as such,” Soumahoro told FRANCE 24 in a televised interview earlier this year. She said Frances reluctance to address such matters derives in part from a misreading of its history.

“France is not blind to racism. France thinks its blind to racism,” she explained, arguing that French colonialism and slave trade had “produced race” throughout the world, but outside mainland France.

“Because slavery was illegal on the mainland, people in France have the impression that this hyper-racialised history that is characteristic of the modern world only concerns the Americas, when in fact we have our own history,” Soumahoro said.

According to Diallo, denial of racism is a legacy of the French Republics “mythology”.

“We are fed the story of a country that is blind to colour and impermeable to racism, but this is merely a mystification,” she said. In a perverse effect, she argued, this denial prevents the country from addressing the problem in the first place.

“France wont give itself the means to measure and address racial discriminations,” Diallo explained. “The country continues to view racism from a moral and individual standpoint. In doing so, it excludes the possibility of enacting broad policies that can tackle the structural problem of racism.”

While France famously doesnt compile official statistics based on faith, ethnicity or skin colour, racial discrimination in all spheres of public life has been widely documented, frequently overlapping with socio-economic inequality.

The intersecting social and racial disparities were glaringly exposed during the nationwide lockdown imposed in mid-March to stem the spread of the coronavirus. The immigrant-rich Seine-Saint-Denis department northeast of Paris – Frances poorest – accounted for a disproportionately high number of both fatalities from Covid-19 and fines handed out for breaching the lockdown rules.

There are obvious reasons for this. The combination of large families in cramped quarters and a lack of doctors and hospital beds left the local population particularly exposed to the virus. And while many Parisians fled to countryside residences or switched to working from home, the capitals poorer suburbs supplied most of the frontline workers who kept the metropolis running.

Touching on this subject in her letter last week, Despentes noted that many commentators added insult to injury by attributing the high mortality to a lack of discipline.

“In France we are not racist, but when we were told that the death rate in Seine-Saint-Denis was 60 times higher than the national average, not only did we not care, we even had the nerve to suggest this was because they dont confine themselves properly,” the novelist wrote.

At the June 2 rally, protesters said this mix of indifference and condescension was apparent in the way much of the media and the political establishment treated their grievances.

Divy Vasanth, a former journalist, pointed to the case of Camélia Jordana, a French singer and actress of Algerian origin who recently caused a storm by using the term “massacre” to talk of police violence in the suburbs. The ensuing backlash, he argued, was indicative of a society that ignores people so long Read More – Source

France has Millions of Unsold Face Masks after Virus Crisis

France has Millions of Unsold Face Masks after Virus Crisis