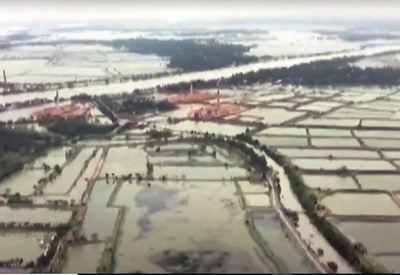 KOLKATA: Chief Minister Mamata Banerjee on Friday said that West Bengal has suffered losses to the tune of Rs 1 lakh crore due to cyclone Amphan that has devastated the state.
After conducting an aerial survey of some of the affected areas and attending a review meeting along with Prime Minister Narendra Modi in Basirhat, she said that there is a need to work together at this hour of crisis.
Banerjee said she has briefed the prime minister in detail about the post-cyclone situation in the state.
At least 77 people have been reported killed so far in the state due to the extremely severe cyclone.
Large-scale damage to infrastructure, public and private property was reported from North and South 24 ParRead More – Source