Home > Opinion > What Turkey hopes to gain from Khashoggis murder

What Turkey hopes to gain from Khashoggis murder

From the moment news emerged that the Saudi journalist Jamal Khashoggi had disappeared after entering the Saudi Consulate in Istanbul, news reports have been fueled by increasingly grisly reports attributed to unnamed Turkish officials and Turkish media about how Khashoggi, a critic of the Saudi regime, met his death.

By now, U.S. intelligence agencies are reportedly convinced that the Saudi strongman, Crown Prince Mohammed bin Salman, often called MBS, is ultimately responsible for Khashoggis killing. But it is Turkeys government, through its officials and its loyal press, that has maintained an ominous, steady drip of information, each leak suggesting that ever-more-gruesome evidence of the murder — and of Saudi involvement — could pop up at any moment. Given that President Recep Tayyip Erdoğan has secured the loyalty of the security services (by firing or imprisoning anyone suspected of disloyalty) and of the media (by shutting down independent outlets and imprisoning critical journalists), it seems likely that he is personally overseeing Turkeys response to Khashoggis murder. But whats he after?

For Erdoğan, Khashoggis assassination — a tragedy and an outrage by any measure — represents a perfectly timed opportunity. Turkey is facing a looming economic disaster at a time when relations are in crisis with the United States, Saudi Arabia and most other potential sources of help. In addition to contemplating a debt tsunami, Erdoğan has also seen his aspirations to turn Turkey into a major regional powerhouse eroded by a series of developments in the Middle East.

Khashoggis killing in Istanbul unexpectedly created a chance to turn around that misfortune, or to at least lessen its sting. Erdoğan, a clever, ruthless operator, is not about to let it slip through his fingers. With his security services in possession of evidence that appears to link Saudi Arabias de facto ruler to the crime, Erdoğan is perfectly placed to extract concessions from the Saudis. And given that the Trump administration has built a foreign policy strategy that hinges on cooperation with MBS, and that Trumps behavior suggests he is invested in protecting the kingdom, Erdoğans leverage over the Saudis extends into leverage over the United States.

By championing justice for Khashoggi, Erdoğan can burnish his tarnished image.

Every drip of information, every report that Turkish police have a recording of the killing; that Khashoggi was tortured before he was killed; that 15 Saudis arrived and left on the day of the disappearance — every bit of news is a message to Riyadh and Washington. It says, We can cause very serious problems for you, or we can help.

Erdoğan has to tread carefully. In Trump and MBS he is dealing with two powerful and vindictive leaders. Thats why the information is not coming directly from Erdoğan. Thats why he has made conciliatory moves, publicly offering to hold a joint Turkish-Saudi investigation. In a curious coincidence, in the midst of the Khashoggi crisis, a Turkish court ordered the release of Andrew Brunson, the American pastor whose captivity in Turkey was one of the greatest irritants between Ankara and Washington. The release opens the way to more changes in the U.S.-Turkey relationship. Trump insists the two cases are unrelated, but the timing suggests otherwise.

So what does Erdoğan hope to gain from all this? The potential benefits are immense.

The most immediate matter is Turkeys economy. The lira has lost 40 percent of its value, inflation has soared to a 15-year high, and massive debt repayments are coming due in short order. In exchange for softening the tone of his criticism and going along with a diplomatic resolution to the Khashoggi crisis, Saudi Arabia might feel inclined to boost its investments in Turkey and perhaps help refinance the debt. The U.S. might help, as well.

Qatar, with whom Erdoğan sided in its refit with Riyadh, has agreed to help. But its $15 billion offer amounts to less than 10 percent of the debt coming due. 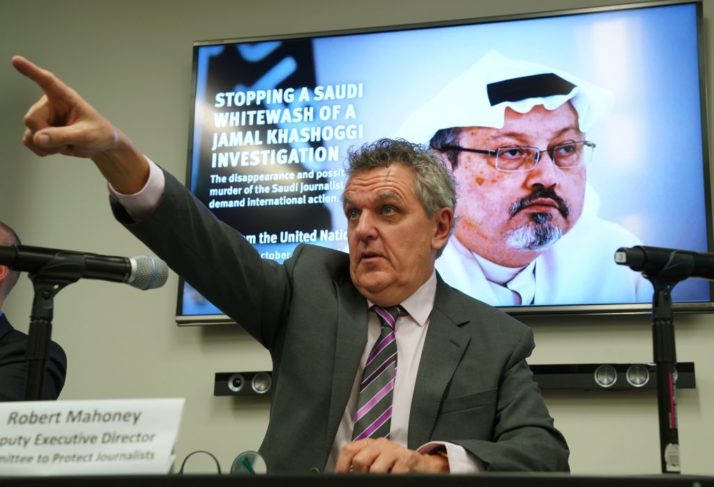 Robert Mahoney, deputy executive director of the Committee to Protect Journalists speaks during a news conference at the U.N. | Timothy A. Clary/Getty Images

By championing justice for Khashoggi, Erdoğan can burnish his tarnished image. The man who crushed all dissent at home can claim to fight for the rule of law; a country that leads the world in jailing journalists appearing to spearhead the quest for justice in the killing of a journalist.

It doesnt hurt that, like Erdoğan, Khashoggi was a supporter of political Islam. Erdoğan now very subtly reinforces his position in support of Islamist politics, but he can also lessen the cost he has incurred for his advocacy on behalf of the Muslim Brotherhood, despite the Saudis implacable antipathy toward the group.

When this is all over, Erdoğan, by helping MBS find a way out of the crisis, could improve his frayed ties with Saudi Arabia.

What about Washington? Ties with the U.S. are also tattered by a series of Erdoğan decisions and bilateral disagreements, including the imprisonment of U.S. citizens and of Turkish employees at the U.S. Consulate; the thuggish behavior of Erdoğans bodyguards in Washington; and the continuing demands by Turkey that the U.S. extradite a Turkish cleric whom Erdogan blames for launching a failed coup against him. Now theres an opportunity to turn the page, improve relations and perhaps persuade the U.S. to behave differently, depending on just how much the Trump administration wants Erdogans help on the Khashoggi matter.

One of the key strategic differences between Ankara and Washington is their view of the Syria war. Among other areas of disagreement, Turkey wants the U.S. to cut off support for Syrian Kurds. Turkey also wants the Kurds to leave the strategically important Syrian town of Manbij.

Turkey is positioned to emerge as one of the big winners from what remains, unquestionably, a great tragedy and an appalling misdeed.

It was fascinating, then, that when Secretary of State Mike Pompeo traveled from Riyadh to Ankara this week to discuss the Khashoggi case, Syria came up in the conversation. After Pompeos short meeting with Foreign Minister Mevlut Cavusoglu, along with Erdoğans national intelligence chief and a top presidential adviser, Cavusoglu told reporters, “We conveyed to the U.S. the importance of applying the Manbij road map.” The Turks seemed happy with what they heard. “Although it was a brief meeting,” Cavusoglu said, “it was useful and efficient.”

In the end, Saudi Arabia and the U.S. will find a way to salvage the relationship. Turkey knows it. Erdoğan knows that is a key objective in Washingtons response. Because of that, he knows he is holding valuable cards. In the midst of this gruesome moment of high-stakes global intrigue and maneuvering, Turkey is positioned to emerge as one of the big winners from what remains, unquestionably, a great tragedy and an appalling misdeed.

Frida Ghitis writes about world affairs. She is a contributing columnist for the Washington Post, a regular contributor to CNN.com and a weekly columnist at World Politics Review.

Read this next: Syrian summit confirmed for late October